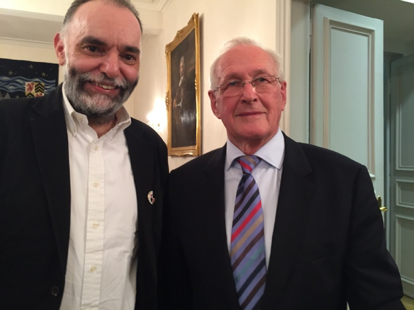 Abdallah Ougazzaden has been named to the National Academy of Metz as a honorary member. He is a professor in the Georgia Tech School of Electrical and Computer Engineering (ECE) and is the director of Georgia Tech-Lorraine.

This nomination recognizes Ougazzaden’s reputation in the field of science and technology and his contributions to the visibility and global reach of the city of Metz, located in the Lorraine Region of France. He received this honor at the monthly meeting of the Academy on December 7, 2017 from its president, Jean-François Muller. The National Academy of Metz was founded in 1757 as the Society for the Study of Sciences and the Arts. In the 19th century, the Academy’s mission became more scientific than literary due to the presence of several engineering and technical schools in Metz.

In addition to serving as director of Georgia Tech-Lorraine, Ougazzaden leads the Unité Mixte Internationale UMI 2958 GT-CNRS, an international research center with laboratories in both Metz and Atlanta. Cutting-edge research in secure networks and innovative materials has also led to the creation of the Institut Lafayette, where Ougazzaden serves as co-president. Institut Lafayette promotes technology transfer from Georgia Tech-Lorraine’s research laboratories and transatlantic industrial research and development opportunities in the optoelectronics sector.