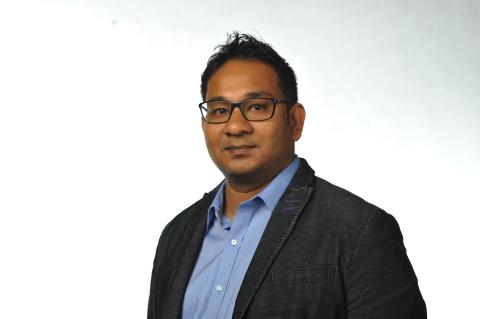 Asif Khan has been chosen for a DARPA Young Faculty Award. Khan is an assistant professor in the Georgia Tech School of Electrical and Computer Engineering (ECE), where he has been on the faculty since 2017.

Khan is receiving this award for his research on ferroelectric field-effect transistors for embedded non-volatile memory applications. Ferroelectric field-effect transistors is one of the most-promising device technologies for artificial intelligence (AI) and machine learning (ML) hardware, due to its energy efficiency and compatibility with high-volume semiconductor manufacturing. The project will focus on solving the critical voltage problem of this device technology, by identifying and implementing new strategies for interface defect reduction in and the downscaling of the ferroelectric gate-dielectric stack.

Khan works on advanced semiconductor devices that will shape the future of computing in the post-scaling era. His research group currently focuses on ferroelectric devices in all aspects ranging from materials physics, growth, and electron microscopy to device fabrication, all the way to ferroelectric circuits and systems for AI/ML/data-centric applications.

His early career work led to the first experimental proof-of-concept demonstration of a physical phenomenon, namely the negative capacitance, in ferroelectric materials, which can reduce the power dissipation in electronic devices below the “fundamental” thermodynamic limit. Negative capacitance is currently a vibrant research area in materials science, condensed matter physics, and electrical engineering, and it is being pursued by all major semiconductor companies for advanced transistor technologies.

In the past, Khan has received multiple awards, including the NSF CAREER Award (2021), the Intel Rising Star Award (2020), Qualcomm Innovation Fellowship (2012), TSMC Outstanding Student Research Award (2011), and the University Gold Medal from Bangladesh University of Engineering and Technology (2011). He was also named to the Center for Teaching and Learning Class of 1934 CIOS Honor Roll for his outstanding teaching in ECE8863 Quantum Computing Devices and Hardware in Fall 2020.

Khan’s group currently consists of seven graduate students and two research staff members. They publish in flagship microelectronics conferences, such as the International Electron Devices Meeting (IEDM) and the Symposium on VLSI Technology, and in journals including IEEE Electron Device Letters, IEEE Transactions on Electron Devices, Nature Electronics, Nature Materials, and Nano Letters. His students received multiple international and Institute-level awards, including the IEEE EDS Masters Student Fellowship (Prasanna Ravindran, 2020) and the Georgia Tech ECE's Colonel Oscar P. Cleaver Award (Nujhat Tasneem in 2018 and Zheng Wang in 2017) for achieving the highest score on the ECE Ph.D. preliminary examination, which was the criteria for the award up to 2018.