New products will need to be created that allow future learners the ability to customize their educational experiences to achieve the credentials relevant for particular points in time of their career and individual lifetime journeys. For example, services should be expanded to advise learners on how these products can be bundled to form cohesive episodic educational experiences that are recorded in a manner to showcase them to outside organizations who recognize and value them.

Higher education institutions still recognize learning credentials mainly at traditional degree levels—associate, bachelor, master, and Ph.D. Within undergraduate and master degrees, the basic unit of completion is still the Carnegie credit hour. New products would include types of learning credentials that are more granular and more reflective of student achievement than current degrees and reflect new ways to recognize progress toward credentials by unbundling courses and reimagining the credit hour as a unit of learning.

Microcredentials The Commission recommends the development of microcredentials—including badges, certificates, and microdegrees —which offer the opportunity to create more efficient packages that certify learning. Experience with the Georgia Tech OMSCS has shown that there is a demand for working professionals who have existing degrees—master’s or even Ph.D. degrees–to come back for another degree if the topic is of interest in the workforce and the price point is right. Microcredentials offer the advantage for learners to earn one or two small- sized credentials in a desired area or to stack together a set of microcredentials to form a typical master’s degree.

A Matrix of Minimester Classes A matrix of short courses in a minimester format can overlay on a regular semester calendar. A simple solution would be to offer three concatenated five-week minimester terms with courses meeting for three hours per week. These courses would have the same weekly intensity of a standard three-credit hour course but would not last as long, having less depth of material. This matrix format would allow students to compose a three-credit- hour course from three one-credit- hour courses.

The minimester framework can be used in a variety of ways: for whole-person education, future faculty training, partnerships in education, addressing the Georgia Tech Commitment, and experiments in pedagogy and curricular design as detailed in the CNE Report Supplement New Educational Pathways: Better Granularity and Greater Flexibility (Georgia Tech 2018f). Because of its versatility, this idea has resonated among students, faculty, and administrators, who see it as an opportunity that fits their own needs and wants.

Transcending the Carnegie Unit: Credit for Accomplishment Recognizing that the Carnegie Unit of time spent in class is not a useful measure of what has been learned, competency-based education (CBE) has become a popular way of keeping track of skills acquired. Continued reliance on the Carnegie Unit raises a number of problems for the Georgia Tech Commitment. For example, much of the novel curriculum resulting from the implementation of Commission recommendations consists of project-based learning and other kinds of active learning not adequately addressed by the Carnegie Unit.

Continuing attempts to translate skills demonstrated in a project to an equivalent thirty-hour lecture/recitation/test is not an efficient way to track student progress. This problem is compounded in the Georgia Tech Commitment since many learners will combine project-based learning, e-portfolios, and certificates of mastery with traditional credit hours based on accredited Carnegie Unit assessments.

One possibility is to abandon the traditional lecture/credit-hour format and adopt skills assessments like those found in CBE. Some peer institutions like Franklin W. Olin College of Engineering have successfully combined project-based instruction with skills assessments to create a true competency-based program. However, in the Commission’s estimation, Olin’s model is prohibitively expensive.

As reported in its Discovering the Drivers of Change report (Georgia Tech 2016), the Commission found that CBE programs like the ones used at Western Governors University (WGU) and Southern New Hampshire University (SNHU), both of which concentrate on basic skills to the exclusion of more advanced understanding of abstract material, are the most common in the United States. Yet programs like these were found to be a mismatch for Georgia Tech students.

Another approach to incorporating competencies is the one used by the CDIO™ Initiative, which, like CBE, establishes an outcomes-driven assessment model based on real-world engineering projects. CDIO affiliate members include many Georgia Tech peer institutions, so there is no doubt that it is possible to construct a challenging, highly regarded curriculum using the CDIO framework.

On the other hand, CDIO does not anticipate the episodic learning trajectories of the Georgia Tech Commitment, so any departure from the Carnegie Unit based on a CDIO framework would inevitably require case-by- case consideration of credentials from other programs for students who transfer into a Georgia Tech degree program, an approach which the Commission believes does not scale well.

The CDIO™ Initiative is an innovative educational framework aimed at producing the next generation of engineers. It provides students with an education that stresses engineering fundamentals within the context of conceiving, designing, implementing, and operating real-world systems and products.

CDIO Initiative collaborators throughout the world have adopted CDIO as the framework for their educational curricula as well as their outcome-based assessments (CDIO n.d.).

Another problem not addressed well by either CBE or CDIO is the churn of knowledge problem in the future workplace. Any fixed listing of skills must confront the speed at which knowledge is changing in key industries. An approach to replacing or supplementing credit hours that requires the concurrence of a third party (like an accrediting agency) or the membership of a consortium (like CDIO) will not be agile enough for the workforce of 2040.

Therefore, the Commission recommends a project aimed at defining a new unit of learning that is tied to achievement but not to a set time in which the achievement must occur. This new unit of learning is intended to be flexible enough to encompass most existing active learning pedagogies but also goes beyond existing active learning in important ways. For example, Georgia Tech will continue to develop novel team learning experiences that are not readily amenable to credit-hour assignment as a unit of achievement but which also differ from project-based learning in fundamental ways.

The same holds true for co-curricular participation, not-for- credit time spent in maker spaces, and creative works that result from design studios. This new unit will be a measure of experiential learning called Dewey Units, in celebration of John Dewey’s commitment to learning by doing as described in Experience and Education (Dewey 1938). Research shows that many of the experiences students have outside the traditional classroom, e.g., when they engage directly in research, discovery, and design, help them to develop whole-person skills.

Establishing a unit of learning by itself is not enough. A Dewey Unit is only meaningful if other institutions recognize it as unit of learning and if employers recognize it as knowledge that can be applied to benefit industry. In other words, establishing a unit of experiential learning also requires the establishment of a market for granting and recognizing those units and assigning a value to them. The final project in this initiative proposes the creation of such a a market based on new blockchain technology.

The Blockchain Credential Project By the year 2040, learners will acquire skills in a wide variety of ways and in varying quantities, or units. While degrees, credits, and courses may persist as common units of achievement, it seems likely that Dewey Units and other units of accomplishment will become common as well. 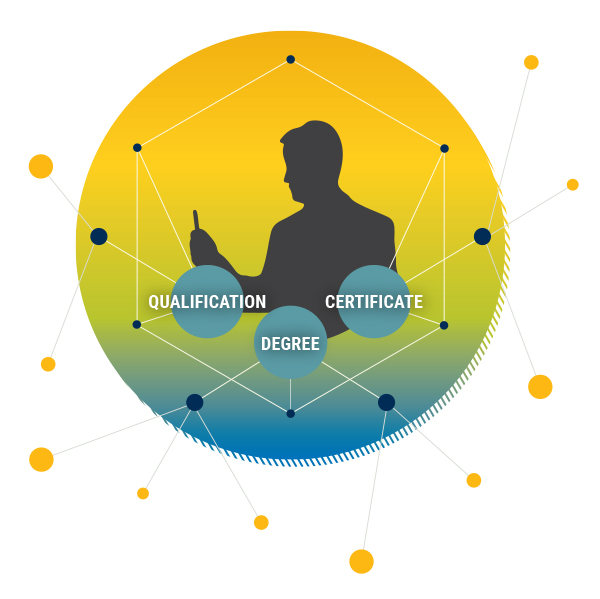 Certificates, seminars, workshops, and self-paced modules may all equip a learner with valuable knowledge, skills, and accomplishments. Utilizing blockchain technology, it is now possible to create decentralized transcripts that allow users to combine such evidence of learning and achievements into credentials that are relevant to potential employers.

Episodic learners will leave a digital trail of accomplishments scattered among various institutions. However, these institutions may not recognize other units of learning, and employers will be forced to try to make sense of fragmentary data that cannot effectively be used to compare prospective employees. Third parties such as accreditors, ranking organizations, and placement firms are used today to solve some of these problems, but third parties are expensive middlemen and gatekeepers.

The goal of the Blockchain Credential Project is to develop an efficient and secure information infrastructure to manage these digital trails without the need for third parties or central authorities. With blockchain credentials, learners can record digital credentials that document achievement into a global digital transcript where records are consumed by employers, educational institutions, and other stakeholders in the higher education system.

However, in the age of the Internet, we have grown accustomed to relying on tools that are not easily understood. Most people, for example, are only dimly aware that the simple act of opening a web browser initiates a stream of coded messages to hundreds of computers that locate remote resources, authenticate users, and route information around the world. Because blockchains allow millions of users who have never met to securely agree on a single, global ledger of transactions, they are now being adapted to record contracts and manage the flow of documents through global supply chains.

Pilots and experiments aimed at exploring these ideas are now underway at a dozen university labs around the world.. The Center for 21st  Century Universities (C21U) at Georgia Tech is building prototype blockchain infrastructure that facilitates sharing and assigning value to the growing number of nontraditional certificates and credentials.