Ougazzaden Awarded with the Chevalier of the Legion of Honor 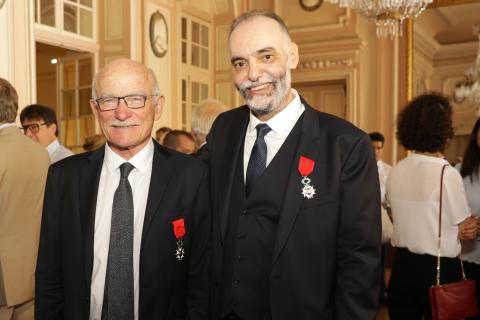 Abdallah Ougazzaden was awarded with the Chevalier of the Legion of Honor on June 28 at the Metz City Hall in Metz, France. This award–established by Napoleon Bonaparte in 1802–is France’s highest order of merit for military and civil activities and is presented on behalf of the French president to recognize its most deserving citizens.

Ougazzaden is the director of Georgia Tech-Lorraine (GTL) and a professor at the Georgia Tech School of Electrical and Computer Engineering (ECE). He was specifically recognized for his achievements in semiconductor science and technology during his 29-year-long career.

Metz mayor, Dominique Gros, pinned the medal on behalf of French President Emmanuel Macron, while Ougazzaden was surrounded by family and friends; eminent colleagues in science, research, and innovation; students; and dignitaries from around the world. An important delegation came from his native Morocco to join in celebrating this well-deserved honor.

Never satisfied with the status quo, Ougazzaden shared memories of a childhood in Casablanca, Morocco that instilled in him a lifelong curiosity and love of science. With a trajectory that has taken him all over the world, from Morocco to France, to the United States and then back to France again, Ougazzaden has long been a sought-after researcher and academic.

Ougazzaden’s specific areas of expertise cover the fields of materials, photonics, and optoelectronics, and he has published over 450 papers and has generated 26 patents in these areas. He began his career with CNET (Centre National d’Etudes de Télécommunications) and France Télécom, where he worked on the development of fiber optics. Ougazzaden then came to the United States, where he spent four years working at Lucent, Agere Systems, and Triquint Semiconductor. In 2003, he returned to France and became a professor at the University of Metz.

In 2005, Ougazzaden joined the Georgia Tech School of ECE as a professor based at the GTL campus in Metz, France. He worked with the CNRS (the French National Center for Science) and Georgia Tech to establish France’s first International Joint Research Laboratory, GT-CNRS UMI 2958. The lab is located at GTL, and he served as its director from 2006-2018.

Ougazzaden currently serves as the director of GTL and is the co-founder and co-president of Institut Lafayette, an innovation platform that provides access to world-class facilities and expertise in advanced semiconductor materials/devices research and prototyping for innovations in optoelectronics. Institut Lafayette also offers technology transfer services that accelerate and increase the efficiency of commercialization of these innovations.

Mayor Gros thanked Ougazzaden for his cross-cultural contributions amongst Morocco, France, and the United States and for maintaining an international dialogue in academics, research, and innovation. “For every speech, there needs to be a spark or conductive wire, especially when we are honoring a semiconductor specialist,” quipped Mayor Gros in an article published by La Semaine de Metz. “That spark is that you [Ougazzaden] have never stopped contributing to the dialogue. This dialogue between professional worlds must be unraveled between the world of research and the needs of industry.” 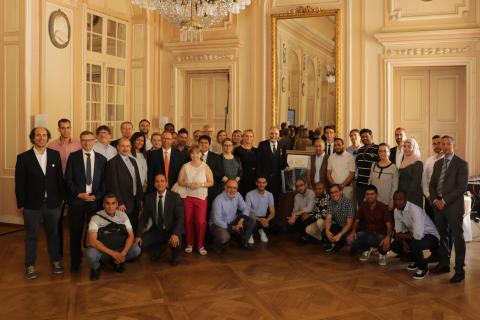